For those of you who have read Multiple Sclerosis From Both Sides of the Desk, I’m sure you remember the short love story, My Life with You. If you haven’t, I’ll bring you up to speed. 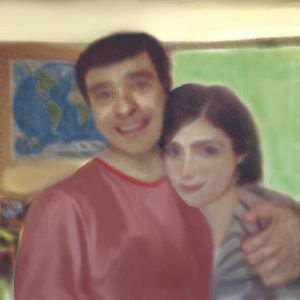 An excerpt from the next Sam and Charlie novel…

“How did you know that you weren’t going to kill that guy?” Charlie asked as he pulled the car past some police cruisers out of the parking lot. Sam turned to look at him.

“I didn’t,” Sam replied flatly. “All I knew was that he had a gun.” Charlie glanced at her and then back at the road. “I also knew that I wasn’t going to let him take you away from me.”

“It was amazing how quickly you acted,” he said.

“When I saw the look on your face, reflexes took over,” she replied. Charlie nodded. They sat in silence as they got on the interstate towards Watkins Glen. Sam turned and looked out the passenger window.  The early spring foliage zoomed by. It was damp and green – just like the t-shirt that the guy at the market had worn. She replayed the scene in her head.

Sam and Charlie were on the way back from Charlie’s brother’s wedding in Niagara. They had decided to pick up some supplies and have breakfast outdoors before getting back to their apartment. Sam saw a sign for Farmington and decided to get off I-90 to look for a store. After driving up and down several streets she realized the town was still asleep. The only sign of life was a motivated squirrel that ran along a power line. As she turned to get back on the throughway, she spotted a general store that had its lights on. She drove down the street and turned into the parking lot. Two other cars were there. In the front there was a tan Kia with a dent in the front quarter panel and in the back was a weathered, black Dodge Dart that had the windows opened slightly in the back. They entered the store and nodded at the young cashier by the register. Sam went to get some eggs, cheese and juice while Charlie got some vegetation to mix in with the eggs. They reconvened at the check-out counter. Register girl had started to ring up the groceries when Charlie remembered that he had also wanted to get some jalapeños. He excused himself and hurried off. Sam saw a bank of motorized scooters fitted with shopping baskets lined up at the front of the store. She took a seat while waiting for Charlie. The cashier, clothed in a faded red sweatshirt and jeans, started filing her nails. Moments later, a thin, tall twenty-something guy opened the front door. He looked around the nearly vacant store. He saw Sam sitting in the scooter and then he turned to the cashier. The cashier looked up. He asked her if he could take one of the plastic bags that were at the end of the counter. The cashier shrugged like she didn’t care and went back to her nails. Sam noticed the young man’s hand tremble as he reached for the plastic bag rack. His sweaty, green T-shirt, which had several holes in it, clung to his back.  Once he had the bag, he pulled a gun out of his pants and pointed it at the cashier. The young woman behind the register stopped filing her nails and stared at the gun.

“Open the drawer and give me the money,” he said while raising the gun and pointing it at her face. He stuck out his other hand with the bag in it. The girl hit some buttons on the register and the drawer opened. She began to fill the bag with money. Charlie, jalapeños in hand, jogged back up to the checkout counter. The crook turned to face Charlie while pointing the gun at him. Charlie’s face went flat. “Move and I’ll blow your head off,” he said.

As the scene unfolded in front of her, a sense of clarity came over Sam. Fear was gone. An unconscious program started. She slipped her hand into her jacket pocket and felt the smooth handle of her camping knife. Wrapping her fingers around the well worn handle, she slipped the knife out. After the fingers of her hand pressed the butt spring, the fingers on the other hand silently unfolded the blade. She slipped off of the scooter. Her eyes were trained on the ribs that were wrapped with the wet, green t-shirt. Keeping her arm bent and pressed up against her body, she held the blade parallel with the floor and took two quick steps forward. The honed knife penetrated the space between the gunman’s ribs. She threw the rest of her bodyweight onto the knife and twisted the blade vertical. The punk emitted a choked, sucking sound. Falling forward together, she held onto the knife and put her knee in his back. Charlie watched the duo crash to the floor. The gun fell from the guy’s hand and slid across the polished tile floor. Charlie pushed it further away with his foot as he picked up a roll of duct tape from a bin on the counter. He moved around next to Sam and taped the wheezing man’s hands behind his back. Sam pulled herself off the guy and stood. She grimaced as she watched him writhe on the floor. Charlie grabbed some towels from behind the checkout counter, placed them around the wound and then withdrew the knife. He rolled the pale man onto his side and propped him against the counter. Sam stared at the young man who was wheezing. Charlie told the cashier to call 911 and then asked where the bathroom was. He went over to Sam and walked her to the back where the cashier had indicated. When they got to the tiny restroom, he removed Sam’s coat. There was blood on her hand and forearm. Standing behind her, Charlie turned on the water and took several pumps of soap from the dispenser. As he started to wash the red off, Sam stood frozen. He cleaned and inspected her hands. Once clear, he grabbed some paper towels and dried her off. Her hands began trembling while Charlie worked. Once done, he took off his jacket and put it around Sam. Then he turned her around to face him. Charlie’s eyes darted around her face and neck looking for any other injuries. Once clear, he looked into her eyes. They were filled with the uncertainty of the moment.