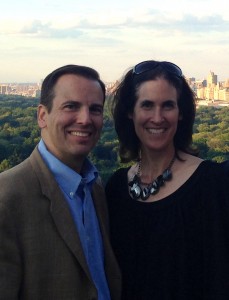 Lauren and Vincent first met before an ecology class in college at Cornell. Vincent noticed a slim beauty sitting next to him wearing a Yankees ballcap.
“I guess you like the Yankees,” he said, breaking the ice.
“Yeah,” she replied with a smile on her face.
“Me too. Thurman Munson was my favorite player.”
Her eyes widened.
“I have his bat,” she answered.
They kissed.

It’s all true except for the last part about the kiss. Actually, they started talking and got to know each other. Eventually, they became good friends. After college they traveled across country. They spent 49 days on the road covering 12,000 plus miles (gas was only about $1.15 per gallon back in 1990). They learned a lot about each other during that time but after the trip was over they had to go to different medical schools (there was a mix up at the travel agency). Lauren went to Jefferson Medical College in Philadelphia, Pennsylvania and Vincent went to Georgetown School of Medicine in Washington, DC.

They traveled back and forth along I-95 to meet up with each other when they found the time. While at Jefferson, Lauren made the AOA Medical Honor Society for academic achievement. Vincent became the editor of Georgetown’s medical school newspaper, The Scope. Using his writing abilities, he then decided to write a book to ask Lauren to marry him. After crafting an elaborate plan to get the book planted in the undergraduate bookstore, he escorted Lauren to the store and got her to buy the book. After purchase, the two went to do some reading on top of the student union. Lauren breezed through the book while Vincent stared at his internal medicine book (something about diabetic ketoacidosis – who could concentrate?) At one point, he heard Lauren start to fumble with the book. He turned around and saw her trying to get the ring out of the book (HE HAD PUT THE RING IN THE BOOK!). After he had gotten the ring out for her he asked her the question. She accepted. Two OB/GYN residents sitting nearby started to squeal when they saw what had happened.

They were married after graduation from medical school. Father Jon, J. O’Brien SJ, DO, LLD (one of the three medical school deans at Georgetown) did the ceremony before going to work at the novitiate in Vatican City.

They were able to get their residencies together in Washington, DC. Lauren did her residency in Pediatrics at Children’s National Medical Center. Vincent stayed at Georgetown for his residency in Neurology.

They then moved back to New York. They had the arrival of their first child, Abigail, in 1998. Lauren worked part time at Flushing Hospital running the newborn nursery. Vincent was working at a group practice on Staten Island when they had their second child, Vincent, in 2001. After about four years, Vincent decided to get a job closer to home. After a stint at Flushing Hospital he decided to start his own neurological practice. He specializes in multiple sclerosis, a disease which he has had for most of his life.

Lauren joined him soon after. Since she is both a physician and has a degree in lactation consulting she is one of the pioneers in the specialty of breastfeeding medicine. She is now fulfilling her goal of helping mommies and babies be successful in the pursuit of breastfeeding.